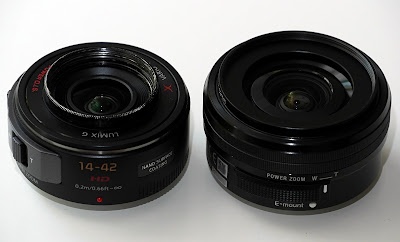 Note that in the picture, I have modified their appearance slightly by adding "lens hoods". On the Lumix lens, to the left, I added a 37mm stand off ring to the front lens thread.

While I don't think these small rings do a significant job as lens shades, I think they keep the front lens element better protected against objects touching it accidentally, and that gives me more peace of mind.


The lenses look and feel quite similar. They are both remarkably small, considering that they are functionally similar to the much bigger basic kit lenses. Also, both have a metal lens mount, and black eloxated, glossy metal exterior surface. The front lens element is also equally small in both lenses, a remarkable feat.

When powering on the camera, the front of the lens extends. The lenses then look like this: 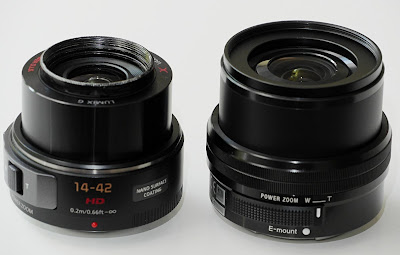 The exterior of the extending barrels appears to be a glossy plastic material. And here is a difference between the lenses: When extended, the front section of the Lumix lens is rock solid. The Sony lens, on the other hand, wobbles a bit. I'm sure this is no problem, but it is a bit annoying.


When powering on the camera, the lens needs to extend before being usable. The Lumix lens is significantly faster here: It takes 1.1s to extend, while the Sony lens needs 1.8s. Here is a demonstration of the power on process. The video also compares the AF speed during video recording, and the video quality:

Neither lenses can be zoomed manually. On the Lumix lens, there is a zoom lever, which you can use to zoom through the focal range. The zooming can be done at two different speeds, by pushing the lever lightly or hard. This works very well during video recording. For still photo use, I would still have preferred to have a zoom ring for better precision.

The Sony lens can be zoomed in two different ways. First, you can use the zoom lever, which, sadly, only zooms in one single speed. This makes it less usable, since small adjustments are difficult to make. On the positive side, though, the zoom lever spans a larger portion of the lens diameter, making it more useful in both landscape and portrait orientation.

Second, it can also be zoomed by turning the focus ring (except when in manual focus mode). This is a clever solution. There is no mechanical contact between the ring and the zoom mechanism, of course, the control is "by wire". Still, it works well, especially with still image photography.


The video above demonstrates autofocus during video recording, where the Lumix lens does much better, even when used on an older camera.

For still image use, it is also my experience that the autofocus is significantly slower with the Sony lens. Mostly, this is no problem, the focus speed is still adequate. In the long end of the zoom range, though, the focus appears to be the slowest, and I have missed some shots due to slow autofocus here using the Sony NEX lens.


Both lenses have the same maximum aperture range, f/3.5-5.6. However, since they both have rather small front lens elements, they both share the same aperture profile, where it quickly goes up to f/5.6 as you zoom in, as illustrated below. The normal zoom lenses, with bigger lens elements, tend to be more linear in this respect. 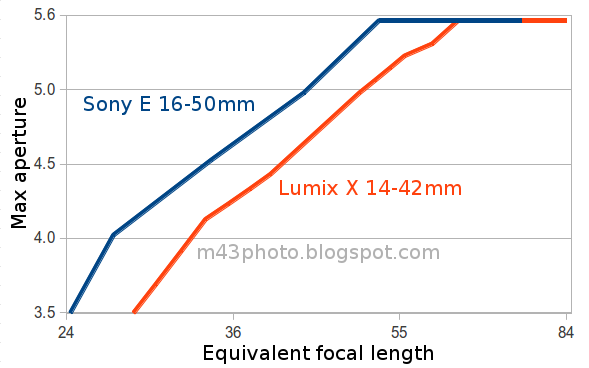 
To investigate the image quality differences between the lenses, I have taken similar images at similar field of view. The Lumix image were taken with the Panasonic GH3, and the Sony images with the Sony NEX-3N. All the images were taken at base ISO (200), on a tripod, and with a fast shutter speed:


To better see the differences, here are crops from the centre: 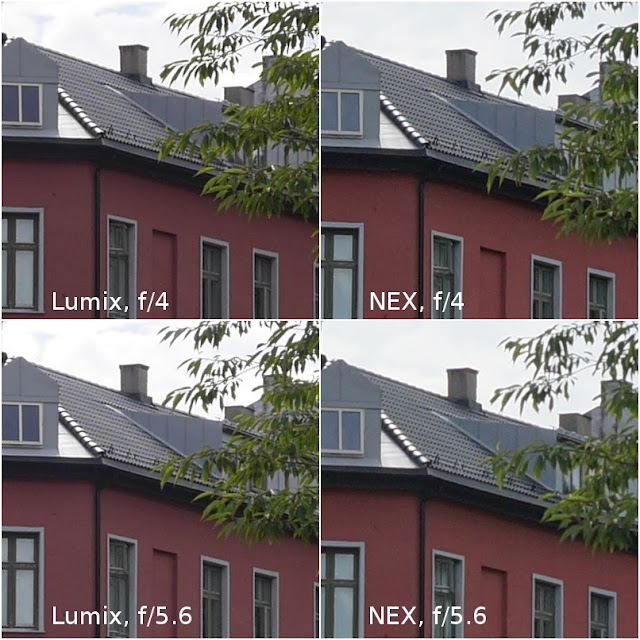 And from the top left corner: 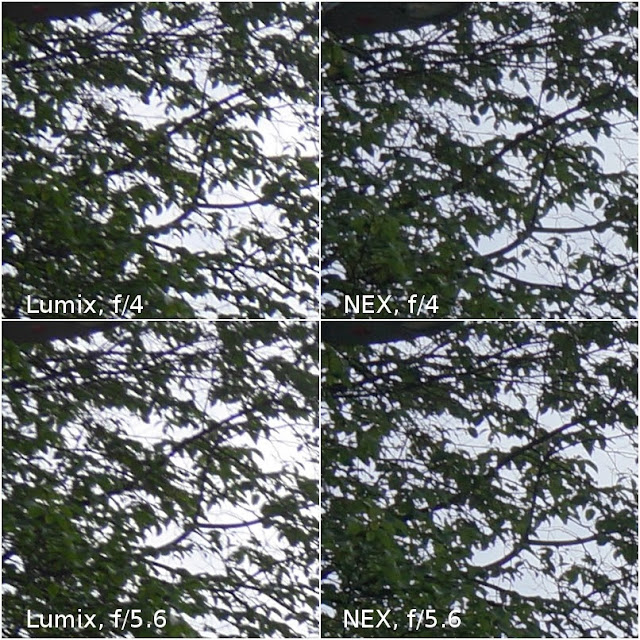 From these pictures, I think that the Lumix lens has the best resolution in the centre. However, in the corner, it exhibits more CA artefacts, making the image look worse.

Here is also a similar test in the long end of the zoom ranges:


Crops from the centre makes it more easy to compare them: 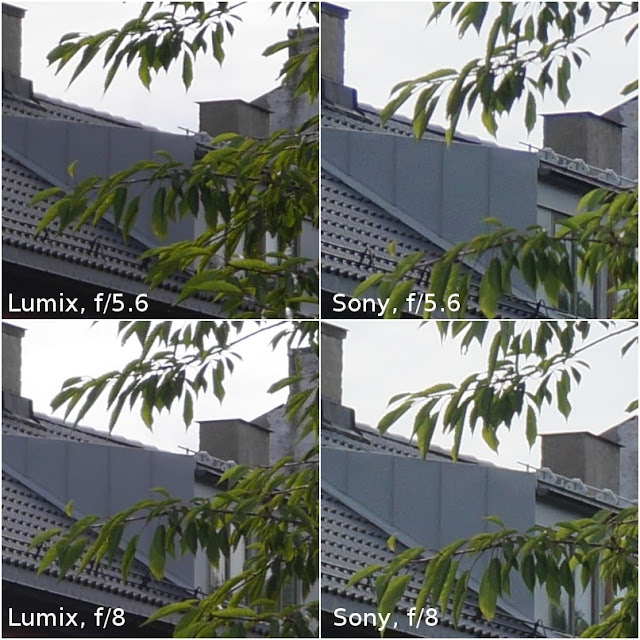 And from the top right hand corner: 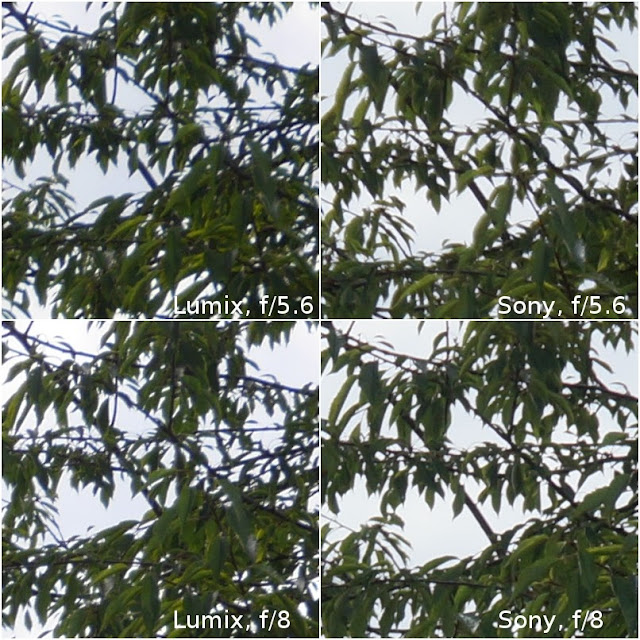 
The Sony lens has a bad reputation, but according to my findings here (and previously as well), the Lumix lens is not a top performer either in terms of image quality. The lenses have slightly different solutions when it comes to zooming, and the twin zoom speeds available with the Lumix lens is quite useful. On the other hand, the Sony lens offers zoom by wire with the focus ring, which works well for still image use.

I think that these lenses are for people who want a compact system, and can live with some minor image quality issues. And as such, they work well. Both lenses come at a fairly high price point, with the Lumix lens being the most expensive.

However, I guess most people don't buy these lenses stand alone. Rather, they are bought as part of camera kits. And Sony is currently selling the NEX-3N with 16-50mm at a very attractive price point. This makes it very interesting as a compact large sensor APS-C sensor system, you could pocket the camera and lens, at least in a jacket pocket.